Bankruptcy – for a whole year?!

“The degree of civilization in a society can be judged by entering its prisons.”[1]

I would not go so far as to say that some reactions to the government’s proposed reduction in the 3 year period of penal servitude for bankruptcy to 1 year is an indicator of the degree of Australian civilisation.

But it does support a view of Australia here and internationally that, as one person put it, we have not yet got over our convict heritage, and we suffer from our insular geography.

Why any period of time at all?

To provoke that Australian sentiment more, why does bankruptcy involve any period of time at all?

The idea of “serving a term” of 3 years, or even one, as proposed, is generally applicable to those jailed, or those whose licence is suspended, or those being required to serve a period of providing community service. It usually follows a court or administrative act in response to a finding of misconduct or crime.

Bankruptcy is properly described as penal, it involves a period of time and “penal servitude” is an apt phrase.

Bankruptcy is not a crime nor a civil offence nor anything lesser.  The circumstances behind it might be but not often. It was criminal long ago and prisons and worse punishments were the consequence.

Could not a person could go through a public declaration of bankruptcy, be obliged to hand over their assets, to have a trustee make inquiries and examine past transactions, without a period of servitude following? As to enforcement, if necessary, many a difficult debtor can be subject to garnishees, examinations and other process without the need for a legal classification.

The consequences of bankruptcy are not good for creditors but neither are many other consequences that are suffered by others because of perpetrators’ legal defaults. Compare the respective outcomes for other perpetrators, as against bankrupts:

Looking at the penal servitude imposed on a bankrupt as result of being unable to pay a $10,000 or even a $100,000 debt, does not compare with the more limited or no consequences for legal defaulters in other parts of the law.

What do creditors get anyway?

And as to bankruptcy’s beneficial outcomes for creditors, after 3 years or more?

On average, creditors receive much less than 5c in the dollar.

In any event, readers will be relieved that this idea is not proposed at all.

All that is being put by the government is to reduce a bankrupt’s period of penal servitude to one year, in common with many other comparable societies.

It will be interesting to see the progress of the Bill and any debates in and out of parliament.

[1] Fyodor Dostoevsky, The House of the Dead. And name of the painting please?

PrevPreviousWhy does the Federal Circuit Court not have corporate insolvency jurisdiction?
NextHow to be ethical in the practice of the law: can it be taught?Next 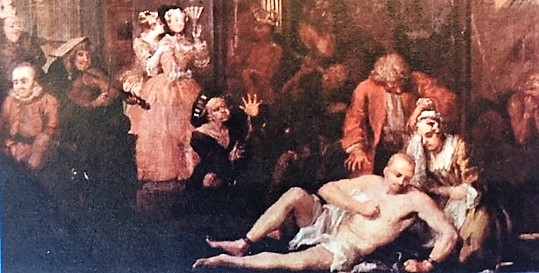