The latest Insolvency Law Bulletin is out with a range of articles covering current and on-going issues in insolvency law and practice – so current that at times, the Bulletin has difficulty keeping up with current case law: (2021) 21(7&8) INSLB.

We have an article on the cross-border hearings between the Full Federal Court of Australia and the Court of Appeal of New Zealand, in the jointly heard matter of Halifax Finance. Professor Trish Keeper’s article was written in anticipation of an appeal decisions, which have now been given.  Some possible and difficult outcomes were avoided by the unanimity of the two courts.  Loo v Quinlan [2021] NZCA 561; Loo, in the matter of Halifax Investment Services Pty Ltd (in liquidation) v Quinlan (Liquidator) [2021] FCAFC 186.

The Bulletin’s editorial contemplated what would have happened had there been dissent, in difficult permutations; and further still, if there were to be applications for leave to appeal.

The main comparison in terms of cross-border insolvency hearings is that of the Nortel bankruptcy – with the joint hearings of United States and Canadian courts.

We have an article from Professor Casey Watters and Mr Matyas Szuk who both attended on-line the last two sessions of UNCITRAL’s Working Group V – Insolvency – in December 2020 and May 2021 – at which guidance on laws for the insolvency of MSMEs was finalised. It is difficult to compare the international perspective on handling MSME insolvency with the old approach taken in Australia.

As to which Senator Stoker’s January 2021 invitation for reform ideas on bankruptcy law in the wave of COVID-19 – perhaps to tighten up the rules that a bankrupt can have “either one washing machine and one clothes drier or one combined washing machine and clothes drier” and “reasonably appropriate bedding, linen and towels”[1] – received and considered 40 submissions, and these “will inform recommendations to the government”.

Mr Mark Wellard of UTS has given us another excellent analysis of an important insolvency decision in the Arrium administration, the title of his article saying it all: Is it ‘commercial reality’ to conclude that a company is solvent until it is ‘certain that it cannot pay’ its future debts? It is apparent that Wellard does not agree with Ball J’s reasoning, as he well explains.

A past article looked at the use of liquidator’s examination documents in litigation assigned to funders,[2] with the authors Justin Ward and Marcel Fernandes explaining that the High Court hearing of the appeal from the NSW Court of Appeal decision in Arrium[3] may shed further light on the question.  That matter was heard by the High Court on 6 October 2021, as to a claimed abuse of the public examination process, and a decision is reserved.

In Parent Company Letters of Support: A Real or False Sense of Security? by Alistair Fleming and Adriano Poncini, of Clayton Utz in Perth examines the role of letters of comfort or keepwell letters such as might be given by a parent to a subsidiary and their efficacy in the context or contest of proving whether the business was insolvent, despite the comfort given.

As to law reform, the insightful editorial passes over the rather tame Part 5.3B which the federal government’s marketers claim are the most significant insolvency law reforms in three decades. As the government moves through its 2017 response to the Productivity Commission Business Entries and Exits Report of 2015, it has now reached the reform of the law for large company schemes of arrangement, including by introducing a moratorium on creditor enforcement while a scheme is being negotiated. TMA’s submission, in which the Bulletin’s Paul Apathy had significant input, is worth reading as well for the many other law reform issues it raises.

The government’s consultation on the safe harbour protection from insolvent trading liability seems to be proceeding. So much has changed in light of the impact of the Coronavirus pandemic, and continues to change, that now is probably not the best time to conduct the review.  Given the progress of law reform – this review was due in late 2019 – any recommendations may not be considered for some years.

There was consternation in some quarters when the government said it was intending to consult on how trusts, which it says are commonly used by small businesses, and others, are treated under insolvency law. A Bulletin article by Stephen Mullette of some years ago, Trustbusters — asset protection and the art of the alter ego entity, looked at the question of challenging discretionary trusts in bankruptcy law. Peter Agardy has also written on this issue, since pointing out that while that potential was not realised,[4] the issue remains.

That consternation is explained by a judge’s comment, in a case about the fitness and propriety of legal practitioners,[5] that

“it was not contended that it was inappropriate per se for legal professionals to employ such structures either for the purpose of tax planning, estate planning or even “ring fencing” presently held assets in the event of a successful claim made against a professional in the future. I would expect that, if that string were pulled, some very large threads of the legal profession would unravel”.

But that particular case was “not a forum to debate the wider questions concerning the legitimacy of the use of such structures”.  That is a matter for law reform, but not this law reform.

Instead, this is all about corporate trading trusts, an insolvency regime for which was the subject of recommendations in the 1988 Harmer Report but which were never considered by the government. Those recommendations might usefully be re-examined, this time without allowing vested interests to prevail.

Other issues around concern CCIVs, and the Treasury Laws Amendment (Corporate Collective Investment Vehicle) Bill 2021 which would introduce a new Chapter 8B in the Corporations Act; the rights of mining royalty holders was recently covered by Cameron Belyea and Cayli Bloch in a recent issue of the Bulletin,[6] with a related issue arising since in Goldus Pty Ltd[7] on which our authors offer some comments.  And since Chris Symes’ article on the review of the Corporations (Aboriginal and Torres Strait Islander) Act 2006, an amending Bill has been introduced into parliament, adopting, we are told, “either in whole or in part, a large majority of the recommendations made …”.  The idea of having a culturally appropriate sage harbour protection was rejected.

This coming week, on 4 November 2021, the High Court will hear the appeal in Wells Fargo v VB Leaseco[8] – in relation to the obligations of the administrators of Virgin Airlines to return leased equipment, at some expense.  Professor David Brown has explained the significance of the issues in his Bulletin article – “Give” and “Take”: Virgin Australia, the Cape Town Convention and Aircraft Protocol.[9]

And Davidson v Official Receiver is an interesting matter about s 139ZQ notices, with an application for special leave to appeal being heard, we understand, on 3 December 2021.

The next issue of the Bulletin is in train and contributions are welcome. 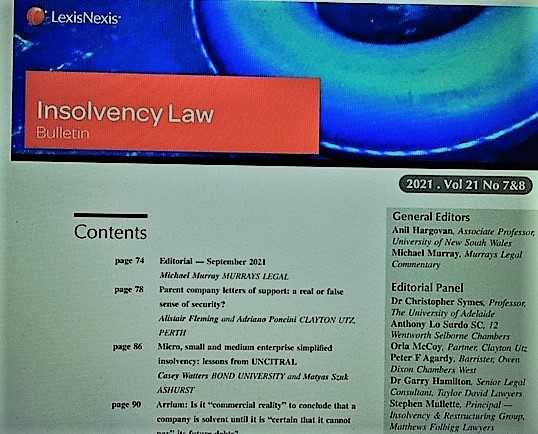