The latest Insolvency Law Bulletin contains a warning about the (then) ending on 24 September of the COVID-19 protections, now since extended to 31 December.

As Stephen Mullette explains, assisted by his musico-literary allusions, the drafting of the March 2020

Omnibus Act is rather strict, requiring any company seeking to have special safe harbour protection to have entered external administration by that date, or the particular assistance given by the protections would not later apply.  Was that intended? We will see when the further law changes are revealed for the 31 December 2020 deadline.  A related strict drafting point was made in relation to the timing of the service of winding up demands in the last issue of the Bulletin; we will need to see if that strict drafting is also continued.

It concerns the rights of landlords of businesses that are traded-on in insolvency in the landlord’s premises, and the allocation of unpaid rent to administration expenses.  But as Professor Symes then asks, will the need for use of actual physical premises change in a post COVID-19 world?

The cross-jurisdictional restructuring of Tiger Resources Limited has broken new ground in relation to Part 5.1 schemes of arrangement, as explained in an article by Tim Klineberg and Jeremy Yam, in relation to multi-jurisdictional restructurings involving Australian companies.  Novel issues were determined, including whether a guarantor could propose a scheme of arrangement to compromise debts borrowed by a different entity (yes), and whether Australian courts have the power to vary English law financing documents (yes).

And the continued difficulties of determining who is an employee, or a contractor, and employed or contracted by whom, particularly in a corporate group, are ones with which insolvency practitioners and their lawyers are continually confronted.  Employees, and therefore the government through the Fair Entitlements Guarantee, remain significant in insolvency. How this was resolved in Branded Media Holdings and the useful guidance that was offered by the decision, is explained by Orla McCoy and Thomas Gardner.

Changes and decisions happen quickly in this extreme economic and social environment with the government having since announced that the insolvency protections are to be extended to 31 December 2020.

The continued restriction on creditors’ rights is a matter of strong debate – as to money, $20,000, and time, 6 months.  As has been pointed out, one big impact will be on the use of insolvency processes for debt recovery.  The term individual debt recovery does not sit well with the collective notions of insolvency, but courts need to find that a relevant debt is unpaid and one way to show this is for the creditors to demand payment. As the court in Alhalek v Quintiliani trading as Kells Lawyers [2020] FCA 1272 said

“(t)he issuing of a bankruptcy notice is a legitimate mechanism to secure payment of a debt – it is legitimate to issue a notice with the intention that the debt be paid, and in the event of default, to proceed by way of petition for sequestration”.

Some finer points beyond that are usefully explained in that decision, for use if and when the insolvency protections are ended. 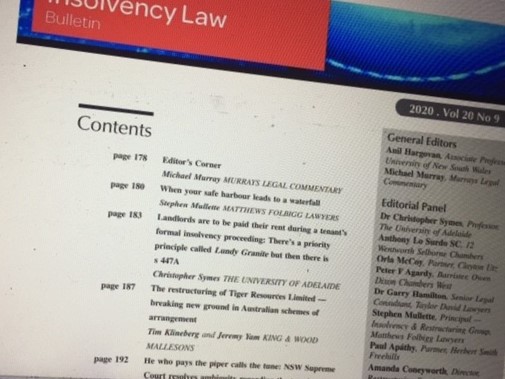