The latest issue of the Insolvency Law Bulletin has just appeared containing a wide range of topics in personal and corporate insolvency, with the COVID-19 impact in Australia and Internationally also being addressed.

One is on New Zealand’s response to the crisis – New Zealand’s new temporary Safe Harbour and Business Debt Rehabilitation Scheme: measures introduced in response to COVID-19 – including its novel business debt hibernation [BDH] arrangements, with NZ rejecting some of our approaches, saying that, for example, Australia’s new and interim safe harbour regime reflected the stricter insolvent trading laws we have in Australia.

An insolvency practitioner’s viewpoint on safe harbour is given by Amanda Coneyworth, a registered liquidator, in Safe harbour advisory in unchartered waters – is it still relevant? – as to practitioners’ safe harbour roles in developing a restructuring plan both prior to COVID-19, and now in the current context, and leading up to contingency planning for a possible insolvency appointment in the event that the safe harbour plan becomes no longer viable.

An excellent article on Insolvency in the Digital Age from Myles Bayliss is written from a local and international perspective, and comments on the recent significant New Zealand decision in Ruscoe v Cryptopia Limited (in liq) as to the proprietary nature of cryptocurrency. He explains the need for insolvency law to recognise the ‘shift away from traditional bricks and mortar business to a new, previously unheralded form of digital business’.

What Seems to be the Problem, Officer? looks at the High Court decision in ASIC v King which rejected a claimed limitation on the definition of ‘officer’ that has implications for many. Ellen Ferris and Stephen Mullette note that while officers are not liable for insolvent trading, they are liable under s 180-184 and may be sued by liquidators for breaches of duty in corporate decision making, and under the new anti-phoenixing laws. 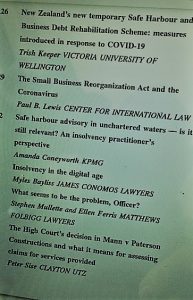 An earlier High Court decision has other insolvency implications, as Peter Sise explains in The High Court’s decision in Mann v Paterson Constructions and what it means for assessing claims for services provided. A proof of debt for unpaid services may have its legal basis in debt, damages or the doctrine of ‘quantum meruit‘, each potentially entitling the service provider, now in liquidation, to different amounts, which the liquidator may have to assess. As the author explains, given the current crisis, the decision has additional relevance to liquidators, and relevance beyond the construction industry.

We also explain the changes to Australia’s insolvency laws in light of COVID-19, and extract the international tracker of insolvency reforms produced by INSOL Europe and LexisNexis.