Here are details of two recent events on climate change and the law, followed by details of a range of other issues covered by Murrays Legal associated with the environment, climate and insolvency case law and policy.

A “hypothetical” on Climate Change: the Science and the Law

Justin Gleeson SC chaired a panel of eminent lawyers and scientists in the context of a complex hypothetical scenario following major ‘Cyclone Kevin’ in northern Australia. The debate was held on 22 August 2019 before an audience of over 200 at the Federal Court in Sydney. 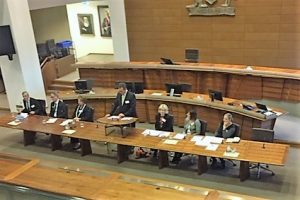 Issues covered included the scientific evidence for climate change and its causes, and in the legal context, its impact on the responsibilities of government and business and the community in addressing its harms. Matters of legal causation and potential liabilities, directors’ duties, assessment of damages, and the responsibilities of government to take climate change into account in environmental decision-making came into the debate.

The debate involved comments on the recent decision[1] of the NSW Land and Environmental Court which dismissed an appeal by Gloucester Resources from a refusal in 2017 by the NSW Planning Assessment Commission of Gloucester’s application for a coal mine at Rocky Hill in NSW.

On the panel, Professor Rosemary Lyster of Sydney Law School said that in approving coal mines Australia is explicitly approving the release of greenhouse gases which is then contributing to the increased likelihood of adverse events relating to climate change, referring to the government’s range of legal duties under domestic and international law.

ANU Emeritus Professor Will Steffen added that if Australia were serious about the ‘Paris’ target no new fossil fuel developments, whether they be coal, gas, unconventional gas or oil would be permissible. “We already have far more carbon facilities in operation today than we need to blow the Paris budget,” Professor Steffen said.

And Macquarie University Pro Vice-Chancellor (Research) Professor Lesley Hughes addressed some ethical issues, saying that the idea that Australia could ship off coal somewhere else to be burnt and therefore absolve oneself of responsibility is morally unacceptable.

The debate is also covered on the Academy of Science website.

The Chair and Panel consisted of:

This was followed by a talk given on 27 August in Sydney by the Rt Hon Lord Sales, Justice of the UK Supreme Court, who spoke on the topic of directors’ duties and climate change. The talk was given for the Anglo-Australian Lawyers Society.

Lord Sales explained the legal issues surrounding the roles and duties of government and business with comparisons made between the laws in the UK and Australia.

Section 172 of the UK Companies Act 2006, imposes on a director the duty to

‘act in a way he considers, in good faith, would be most likely to promote the success of the company for the benefit of its members as a whole’

and, in so doing, to have regard to a series of factors listed in the section which refer to the promotion of social, environmental and governance objectives.

“the impact of the company’s operations on the community and the environment”.

These were discussed in the context of disclosure of the costs of addressing climate change in a company’s accounts, compliance with environmental laws, and potential litigation arising from breaches, including group actions. Responsibilities for directors to meet these obligations has been the subject of considerable debate in the UK.

In contrast, Lord Sales referred to Australia’s more general duties under s 180 and related section of the Corporations Act 2001 with a suggestion that more specific duties, taking climate change into account, might well be considered. He referred extensively to the opinion given by Noel Hutley SC as to the duty of Australian directors under s 180 Corporations Act to respond to climate change risks.

“has effect subject to any enactment or rule of law requiring directors, in certain circumstances, to consider or act in the interests of creditors of the company”.

Lord Sales referred to the recent Sequana decision of the Court of Appeal[2] which concerned the duty of directors to have regard to the interests of creditors in the contexts of the impact of the company’s environmental liabilities for contamination of a river on its solvency and the consequent duties of directors to consider the interest of creditors, and the directors’ decision to pay an otherwise lawful dividend.

Murrays Legal has covered a number of issues of the law and the environment, all at this environmental link, including:

Proof of service of a bankruptcy notice – why it is, or why is it, so important?

Deregistered/dissolved companies – let them be?

Report on targeting of people in financial hardship

The Economics References Committee has issued its report, on time, following its inquiry into ‘Credit