INSOL International has just published a global review of how insolvency practitioners’ fees are assessed and approved across a range of jurisdictions, including Australia.  The opening commentary provides a good summary of the various approaches and their respective merits, followed by more detailed explanations of 14 countries’ fee regimes.

Australia is in the midst of insolvency reform generally right now, some of which involves fees.  The following brief comments are made on the INSOL publication, Australia’s position, and other recent developments.

Australian law does now and will further enhance the role of the specialist bankruptcy regulator – AFSA – in fee setting. This is a default role, in the event that creditors do not approve the remuneration or there is a dispute.  Given that AFSA itself administers bankrupt estates (albeit on a set commission basis) there should be confidence in its experience in setting remuneration.  One necessary aspect should be that AFSA publishes its reasons for decision in each case where it is asked to set fees.

A government regulator role seems preferable to engaging the courts, even if the courts remain as a final recourse.

Creditors are said to be ineffective, because they do not understand the insolvency process, and because they disengage.  The first argument is problematic, in that if a commercial creditor cannot assess a time-costed professional bill it may not say much for its business acumen in dealing with professional or trade services generally.

In any event, some of the work of a practitioner involves statutory reporting and work in the public interest. We can’t expect creditors to understand that a practitioner may need to spend ‘creditors’ funds’ undertake investigations for the pursuit of prosecution, or may sue to recoup their own fees, or sue to enforce compliance with the law, much of which may not produce dividend outcomes for creditors.

What is expected of a practitioner

As well, in Australia, and maybe elsewhere, the boundaries that set what is expected of a practitioner are often unclear; one recent court decision in Australia – Linc Energy – imposing environmental compliance responsibilities of the company on the liquidator; cf Orphan Well Association v Grant Thornton.  The extent to which a practitioner should use funds to investigate for the benefit of the regulator is another; in particular where there are no funds.

It is difficult to have a debate about remuneration in the context of the uncertainty in many areas whether the work done leading to the claim of remuneration is itself valid.

Which then leads me to a point only obliquely raised in the INSOL report, being the source of remuneration, often, for reasons unclear to me, overlooked.  It seems accepted that remuneration must come from the assets of the insolvent, but with some pressure on a proportionate amount being levied: Sakr Nominees.  If there are not enough assets, what then? Should the government take a role in administering assetless estates, or provide funding for the unmet balance, say from a levy on company registrations.  Or should the practitioner limit work done or decline or resign the appointment.

It has been validly said, by R3, that insolvency practice may be the only profession where work is expected to be done even if unremunerated.

Remuneration for the administration of MSMEs is one aspect of a working paper issued for the next group session in New York from 10-19 May 2017. The paper addresses the issue of the limited or nil funds to allow the winding up of MSMEs.  Some EU countries forego formal insolvency of such entities, with obvious potential for abuse.

The funding and fee for the insolvency administration of small enterprises brings many fee issues to the fore.

A contentious point, in Australia, is how the system, or its regulator, is funded.

As briefly and simply as possible, Australia has two parallel regulators, AFSA for bankruptcy trustees, and ASIC for company liquidators. Many practitioners hold both roles.  AFSA itself administers 80% of the consumer bankruptcies, the private profession the remainder.  ASIC administers no liquidations, 100% of which are handled by the private profession.  Australia’s personal and corporate insolvency laws have this year been harmonised, so that AFSA and ASIC have common rules to monitor and enforce.  However, each recoup their costs of regulation differently:

This but an Australian perspective, a jurisdiction with a well developed insolvency regime, one nevertheless open to much reform.  Other countries covered are Brazil, Canada, Cayman Islands, China, England, Germany, Hong Kong, India, Scotland, Singapore, South Africa and the USA.

The INSOL Special Report – Office Holder Remuneration – Some International Comparisons, March 2017 – was led by Eric Baijal of BBM Solicitors, Scotland, who gives an excellent analysis comparing all the countries’ approaches in the opening chapter. The Report should prompt debate with a view to better understanding and resolution of this fundamental issue. 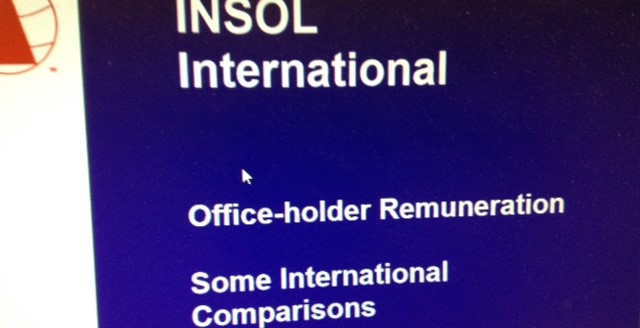