This is a very good book on Canadian insolvency law, sadly with no equivalent in Australia, as I explain below. My review of it was/is to appear in the expected December issue of the Insolvency Law Bulletin, but publication of that issue is delayed until 2021.

It may be inadequate and perhaps presumptuous for an Australian lawyer to review Professor Virginia Torrie’s Reinventing Bankruptcy Law – A History of the Companies’ Creditors Arrangement Act of Canada.  Reviews of the book report that her text “explode[s] conventional wisdom” about the history of what is now termed “Canada’s premier corporate restructuring statute”, despite its limited beginnings, and allow it and its re-interpretation and impact to be seen in a new and clearer light.

In its few sections, the CCAA was enacted in the depression year of 1933 as a remedy for secured creditors, and their protection from the debtor’s liquidation. It had become, according to Torrie, ‘essentially a dead letter’ by the early 1980s. But changes in the approach to insolvency were occurring in Canada not only in secured lending and debtors’ rights but also in organised labour, environmental concerns and proclaimed rights and freedoms.  The Supreme Court itself was assuming a more policy-conscious role in developing the law, and the economic recessions at the time provided debtor led opportunities for the CCAA to be transformed into a significant avenue for corporate rescue.  American finance and influence increased, with the CCAA coming to mirror US chapter 11 and adopt debtor-in-possession concepts, all far removed from its secured lender original focus.

Professor Torrie describes the resurrection of the CCAA through what is accurately described as a “meticulously researched and multi-disciplinary” analysis, enlisting the disciplines of legal history, socio-legal theory, political science and doctrinal legal analysis. She brings in insights based on concepts of “historical institutionalism” and “recursivity of law”, concepts initially explained by Professor Anthony Duggan in his foreword, to explain the mix and flow of competing interests impacting the use of the Act and the dynamics of how it changed over time. In that respect, the book acknowledges and bears favourable comparison with Rescuing Business,[1] and its comparative socio-legal analysis of late 20th century English and US insolvency law reforms, and the institutions and professions involved.

It is no slight on Torrie’s work to say that while her analysis of the CCAA would be of interest in Australia, its greater interest and potential impact should arise from the realisation that we have no comparable published analysis, nor comparable thinking, and those with insight would see us as being the poorer for it.  Professor Torrie shows what useful insight an analysis like this could bring to Australian insolvency law – its history for one thing, little researched and yet holding much of the sources of current thinking; the sociology, and how the various interest groups seek to mould the law to their own expertise and interests; processes such as path dependency, influenced at least in Australia by its rigid historic constitution-based structure and its under-appreciation of entrepreneurial risk, resisting any “US style” debtor in possession models, at least until now; and the continued strong influence of secured creditor rights in Australia, perhaps impeding their co-administration with the rights of unsecured creditors comparable with the UK’s major 2002 reforms.  Deeper analysis might reveal an understanding of Australia’s, or more particularly its individual states’, lack of adoption of an Official Receiver in corporate insolvency, following the UK’s significant policy decision to do so in the late 19th century, and then New Zealand’s, despite our corporate insolvency laws otherwise largely following English law and practice.

As to the Australian courts, I myself could not see them having the influence of the Canadian courts, which Torrie describes as having “switched roles” with the legislature, functioning “like a modern-day Court of Chancery”.  In modest comparison, we do have the recent example of the High Court’s acceptance of the “holding deed of company arrangement”;[2] and the flexible uses of s 447A of the Corporations Act,[3] and the acceptance of the courts of the need to adopt modern communication methods and more, evident in the recent Virgin Airlines matter.[4]  But the judicial comparison may need to take into account that while Australian insolvency reform is rather slow and path dependent, its receipt of a somewhat greater level of attention does lessen any undue calls for judicial activism, and we have no law with quite the peculiar history of the CCAA.

The book is timely given the economic circumstances and impact of COVID-19 and the prompt that the crisis has given to the need for insolvency law reform.  All jurisdictions are facing what is and may well continue as unprecedented economic and social disruption.  An understanding of Professor Torrie’s analyses of the interests and dynamics of the various competing parties present in insolvency law reform would assist in directing any law reform process more effectively and transparently.

Apart from the present crisis, it is said by many that Australia’s insolvency laws, based on needs and aims and concepts of last century and before, are in need of review and reform. Their ‘reinvention’ would be much assisted by the sort of insights and analyses found in this book.

And beyond insolvency law reform, the book offers insightful and useful approaches to the analysis of any body of law, in showing how it continually evolves to address on-going change.

Reinventing Bankruptcy Law: A History of the Companies’ Creditors Arrangement Act, by Virginia Torrie, with a foreword by Anthony Duggan, 2020, University of Toronto Press.

[2] Mighty River International Ltd v Hughes [2018] HCA 38, with an interesting historical analysis given in ‘The evolution of bankruptcy and insolvency laws and the case of the deed of company arrangement’, James Edelman, with Henry Meehant and Gary Cheung, 2019 Oxford Law and Finance Distinguished Speaker Series, University of Oxford, 14 January 2019. Justice James Edelman was a member of the High Court of Australia which gave that decision. 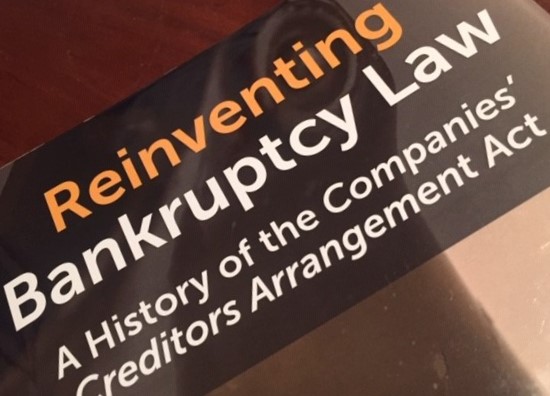