The Australian Academy of Law 2019 prizewinners

The Australian Academy of Law awards annual essay and other prizes.

On 7 December 2019, the essay prize of $10,000 was awarded to Dr Ellen Rock of the UTS School of Law for her essay on “Resolving Conflicts at the Interface between Public and Private Law”, the abstract of which is:

“Public and private law converge in cases where causes of action and remedies from both sides of the divide might be brought to bear, such as where the same conduct might amount to both a tort and crime, or where demonstrating invalidity of an administrative decision is an element of tortious liability. The essay canvasses a range of procedural tools that can be utilised to shape the relationship between public and private law; moving between independent, staged, prioritised and collaborative relationships. The question of whether these tools ought to be utilised in a given case is influenced by a range of policy concerns tied to the interests of the parties, the institution of the courts, and the wider public. Accordingly, the relationship between public and private law, and the question of what principles and remedies ought to apply at the interface, requires a delicate balancing act between these interests”.

Like previous winning essays, Dr Rock’s essay will be published by the Australian Law Journal. 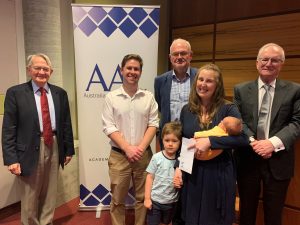 Dr Rock was accompanied at the 7 December presentation by her family. The President of the Academy Dr Kevin Lindgren presented the prize supported by Deputy President Justice Alan Robertson and myself as Academy board member.

I was also pleased to judge the finalists of the ANZ Law Honours Student Conference 2019. The winner was Kate Mani of Monash University, whose topic was

“Social Media Chatter, Googling Jurors and the Determined Searcher: How the Internet is Threatening the Efficacy of Suppression Orders” 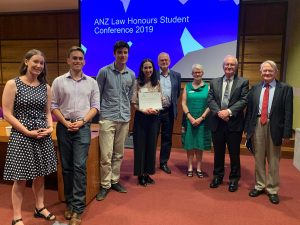 The Conference involves law honours students from Australia and New Zealand presenting to their peers and to at least one academic in the audience the gist of their honours thesis. They are asked and answer questions arising out of their presentations. This year there were 58 participants and those judged the best four gave three-minute summaries of their presentations in a “final” in a plenary session. They were judged by the Dean of the UTS Faculty of Law Professor Lesley Hitchens, Dr Lindgren, Justice Robertson and myself.

PrevPreviousDealing with MSE insolvency – UNCCA Australia
NextPart 5.3A is not a device to escape payment, much less to protect directors from their misconductNext