I earlier reported on my December 2016 attendance in Vienna, on behalf of LAWASIA, and UNCCA, on the two model laws that UNCITRAL Working Group V (Insolvency) has been drafting. Each proposed model law has the potential to provide significant assistance in cross-border insolvencies.

This is an extract from a longer commentary, which, for those interested, appears here.

Each one could therefore simply be added to the Model Law. One reason for proposing to keep them separate is that, if they become model laws, they each could be adopted by countries that have so far not adopted the Model Law.

It follows that each draft seeks to address issues not dealt with, or dealt with adequately, in the Model Law or cross-border law generally.

Countries and organizations attending, and the one that did not

By way of final opening comment, delegates of many countries attended, including the US, UK, Canada, Germany, Italy, Chile, Thailand, Singapore, Japan, China, Russia, Panama, and many of the eastern European nations. Organizations attending included the World Bank, the EU, and INSOL International.

Australia was not represented and has not sent a delegate for some years.  (Perhaps cost of travel and accommodation is an issue.  For the record, my self-funded outlays were AU$3,700, and unfunded remuneration AU$18,500).

I. Draft Model Law on Recognition and Enforcement of Insolvency-Related Judgments

This draft law appears to be the most progressed.

Its impetus was the decision of the UK Supreme Court in Rubin v Eurofinance which held that a default judgment of a US Bankruptcy Court in an insolvency avoidance decision could not be enforced against an English defendant who had not specifically appeared in the US proceedings. That defendant could only be pursued for payment in a new proceeding under English law.

In light of Rubin and its aftermath, the work of WGV aims to provide for enforcement of an “insolvency-related judgment”, encompassing not only an insolvency judgment, such as under a voidable transaction claim, but also one related to insolvency, such as an order of discharge, or confirmation of an arrangement.

The limits of what might be an “insolvency-related judgment” were in issue, an example being whether it would cover the pursuit of rights of the insolvent, or be restricted to post-appointment actions accruing to the insolvency administrator.

A judgment is proposed as enforceable only if it is enforceable in the state where it was ordered; hence a judgment on appeal can be recognized and enforced only if the originating state would allow it to be enforced pending the appeal.

Recognition and enforcement of an insolvency related judgment is intended to be straightforward in principle, although with rights to refuse on grounds that are a significant feature of the draft, being the “due process” objections to enforcement under the “public policy” exception in the draft, which refers to “the fundamental principles of procedural fairness” of the local state. This addresses concern to preserve the primacy of the court ordering the judgment, given the variable global rule of law standards.

This draft is not as far advanced but its principal provisions seem to be in place.

The current Model Law is limited in that it applies only to the insolvency of individual entities. It does not have provisions that explicitly provide for group insolvencies. The internationalization of business means that its scope is limited and this generates uncertainty for parties and hence, inefficiency in the conduct of insolvencies cross-border.

This draft creates a basis for cooperation and communication between a local court and foreign courts and group representatives, and between group representatives, foreign representatives and foreign courts. It provides explicit authority for entry into protocols or agreements, and it identifies several forms of cooperation including sharing and disclosure of information, negotiation of agreements and protocols, allocation of responsibilities and coordination of the administration of group members and the negotiation of a group insolvency solution.

It significantly provides that a single insolvency representative may be appointed over proceedings in more than one jurisdiction, subject to qualification and the supervision of the local court.

The draft law provides for a “group representative” in a cross-border “planning proceeding” who attempts to coordinate the insolvency proceedings of foreign “enterprise group members”.

A “planning proceeding” is a

Any enterprise group member in an insolvency proceeding in a foreign court may participate in a planning proceeding.

The purpose of a planning proceeding is to develop a “group insolvency solution,” proposed to be defined as

“a set of proposals” for the reorganization, sale or liquidation of some or all of the operations or assets of one or more group members “that would be likely to add to the overall combined value of the group members involved.”

The draft law is structured so as to give the “group representative” appointed in a “planning proceeding” powers to seek and obtain interim relief in aid of the recognition of the planning proceeding. After recognition, the local court may grant “any appropriate relief,” including the approval of the treatment in the group proceeding of creditors located locally, and it may entrust the distribution of assets located locally to the group representative provided the interests of local creditors are adequately protected. The group representative has standing to participate in a local proceeding and the local court may approve “local elements of a group insolvency solution”.

WGV has not decided on the extent to which the court administering the group proceeding can grant local creditors the recovery rights they would have received locally whether or not a local proceeding has been opened.

Decisions of the English courts, notably, Collins & Aikman, have developed the principle of virtual or “synthetic proceedings” in lieu of commencing non-main proceedings. In order to deter local creditors from opening or maintaining an expensive and potentially burdensome local proceeding, the court of the main proceeding may authorize distribution to local creditors of what they would have received in a local proceeding, notwithstanding the order of distribution of the main proceeding. The US provides for somewhat similar relief on a non-statutory basis through its “first-day orders”.

The current draft law provides for synthetic relief with respect to non-main local or secondary proceedings.

The next meeting will continue with the drafting of both laws, all delegates having had time to seek the instructions of their respective states and stakeholder groups.

For those interested, a recent paper by the Hon Allan Gropper, formerly of the US Bankruptcy Court, and a text, Cross-Border Insolvency Law, by Sandeep Gopalan and Michael Guihot, provided me with much useful comment.  Any errors are my own. 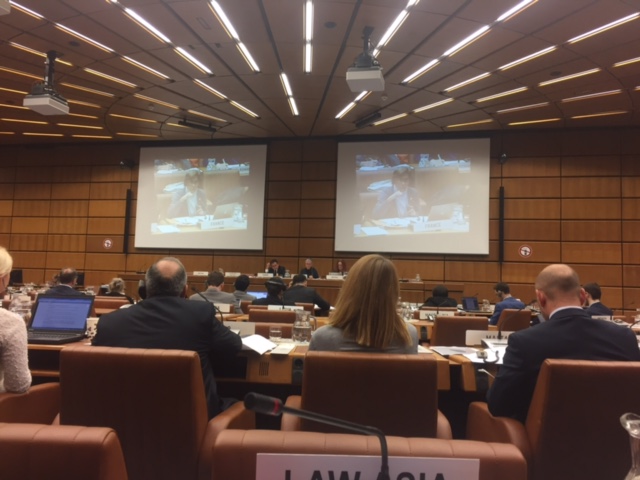