A person goes voluntarily bankrupt in Australia by completing an online “Bankruptcy Form” with the Official Receiver. What is now more a loosely worded opaque techno process has been criticised by a Judge as containing a “presumptuous statement, “I am voluntarily becoming bankrupt” and a presumptuous question, “What do you believe is / are the cause(s) of your insolvency?”, with the “Form” in that matter then being sent off to Adelaide, where “exactly what happened upon its receipt there is, on the evidence, something of a mystery”.

In Re-naming rights of the bankruptcy regulator | Murrays Legal, I was critical of the delegated legislative authority exercised by AFSA to create its own forms and impose its own terms and conditions on legal processes.  While some changes have been made to rename unclear or inconvenient legal words in the Act, others have been to add requirements not required by the law.  The example was the ‘declaration of intention to present a debtor’s petition’ under s 54A of the Bankruptcy Act which AFSA has re-named as a ‘temporary debt protection’ ‘form’ – a TDP. One has to apply to AFSA for a copy. Section 54A serves to stay creditor claims for 21 days.

And with many bankruptcy forms, they are online; one has to apply to AFSA for a copy. Section 6D of the Bankruptcy Act, which allows the Inspector-General to create approved forms in wide terms, appears to be the authority.

In a recent annulment matter, Thompson v Lane (No 3),[1] another renaming effort, the “Bankruptcy Form”, by which the debtor’s bankruptcy came into effect, was in issue.  The bankrupt claimed that her debtor’s petition “ought not to have been accepted by the Official Receiver” in terms of s 153B(1).

In the words of Justice Logan, AFSA has

“evolved the debtor’s petition and the related statement affairs contemplated by s 55 of the Bankruptcy Act into a composite document termed the “Bankruptcy Form””.

This term refers not to any of the many forms issued by AFSA under the Act but to what appears to be a composite document of the petition under s 55(1), and the statement of affairs under s 55(2).

Section 6D seems to allow changes in the nature of delegated legislation, even dark law, It might not be subject to parliamentary scrutiny, but it is subject to judicial scrutiny.

As to the statute law, when a person “presents”[2] a petition to go bankrupt under s 55(1) of the Bankruptcy Act, there are supposed to be a number of steps taken to ensure that the process of “acceptance” and then endorsement by the Official Receiver under s 55(4A), whereupon the debtor becomes “bankrupt”, do not happen without scrutiny.  Once those steps are completed, the debtor is then deemed to have become a bankrupt “at the first instant” of that day: s 57A.  When a bankruptcy actually “commences” is determined by s 115(2).

Those steps comprise a number of precautionary bases upon which the Official Receiver is authorised not to accept a debtor’s petition. Bankruptcy is a serious legal step and there have been instances of persons going bankrupt by mistake, or without realising its implications, or through duplicity.

In this case, Justice Logan pointed out that the steps imposed by the law are not evident in the online Bankruptcy Form process.

There is no statement by the debtor that they present their petition under section 55 of the Bankruptcy Act.[3]

“Instead, the current [form] contains the presumptuous statement, “I am voluntarily becoming bankrupt”.[4]

“Yet further, it contains a presumptuous question, “What do you believe is / are the cause(s) of your insolvency?” without eliciting a prior admission of insolvency by reference to the position disclosed on the “statement of affairs” portion of the form”.

Further, the Bankruptcy Form was sent off to the office of AFSA in Adelaide.

“Exactly what happened upon its receipt there is, on the evidence, something of a mystery. … All that can be determined on the evidence as to the fate of the Bankruptcy Form submitted to the AFSA is that, inferentially, it was accepted by an Official Receiver, because on 1 July 2021, Mr Lane was appointed by an Official Receiver as the trustee of Ms Thompson’s bankrupt estate”.

That is rather alarming.  The date of acceptance and endorsement of the petition determines important time limits under the Act.

Justice Logan harked back to the days of the registrar in bankruptcy, one of whose roles was to accept debtor’s petitions.  That changed, in 1996, from a legal process to a management/technology process.  But the legal requirements of presentation, acceptance and endorsement under the Act remained throughout.

As the Judge said, bankruptcy still involves a change in status and particular restrictions, the breach of which may be attended with penal consequences.

In the end, in this case,

The annulment application was dismissed.

ASIC now has its own s 6D, in the form of s 100-6 – Approved forms – of the Insolvency Practice Schedule (Corporations), which it uses: Insolvency forms – Updated for restructuring and simplified liquidation processes | ASIC – Australian Securities and Investments Commission.

[4] Apart from being presumptuous, it is ungrammatical and imprecise.

PrevPreviousLiquidators’ examinations – a sea apart; legislative drafting – “a huge amount of material to wade through before they take a single step”
NextAustralia on a slide?Next 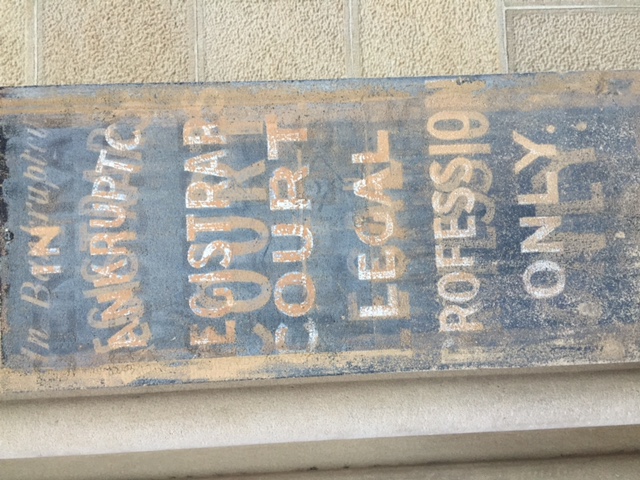